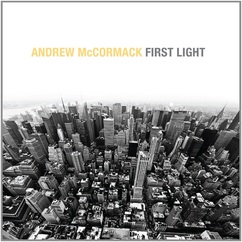 Andrew McCormack has followed in the footsteps of many young talented British musicians who have taken the opportunity to decamp to New York to hone their talents through exposure to the most fertile breeding ground for jazz inspiration on the planet. In this new recording, his Edition records debut, we can hear how the city’s cosmopolitan vibes have acted on his Euro inflected classicism to produce a deeply satisfying and stimulating set of original pieces plus an original take on a time honoured jazz standard.

My first impression on hearing McCormack play was that I was listening to a modern Richard Twardzik such is the asymmetric feel of his compositions and the searching chromatics of the improvisations developed from them. As a student of Mark Anthony Turnage, a controversial figure in contemporary classical music, McCormack is well versed in formal compositional technique and in these pieces he demonstrates an ability to merge his cerebral ideas with rhythmic solutions that pay due respect to both classical and jazz conventions.

Opening with a lively, gospel inflected theme that gives his colleagues space to stake out some ground he continues with an atmospheric piece entitled `Gotham Soul` in which the ghost of Bach haunts the canyons of the metropolis. Up next is a fascinatingly complex piece, `Leap of Faith` employing a quirky intervallic gear shift and a line of conversation that would appear to utilise the 12 tone scale. More delights follow: ostinato rhythms, trailing arpeggios, taut counterpoint as well as chordal climaxes.

The New York influence asserts itself most forcibly in a piece called `The River` which far from emulating the legato flow of aquatic impressionism provides the funkiest stimulus of the set and features an exciting bass n’ drum sequence. Perhaps it is meant to represent the city skyline reflected in the East River. The penultimate track is a haunting, elegiac vignette for solo piano and the recital ends with lovely, lilting version of `Pannonica` in which Monk’s intervals are ironed out in order to emphasise the simple beauty of the melody.

There are so many young virtuosi pianists and piano trios on the scene at the moment that the jazz fan is presented with an almost bewildering choice but don’t let an embarrassment of riches sate your appetite and cause to pass up on what could be the most compelling release of its type this year.