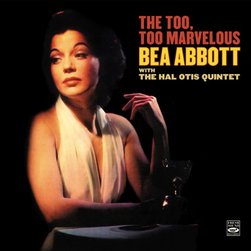 BEA ABBOTT – The Too, Too Marvellous Bea Abbott

With the Hal Otis Quintet

This album contains all the recorded work of Bea Abbott including four tracks made with Hal Otis and her single solo album “The too, too marvellous Bea Abbott” which carries the same title as this release, they were all released on the Westminster label.

In 1944 Bea Abbott worked with the Boyd Raeburn band and then a then moved on to Henry Jerome’s thirteen piece band. She went on to work with a number of little known dance bands before working the club circuit, she also worked with her husband Leon Ruby with his band.. She was popular with live audiences and carved out a pretty good career.

Unfortunately during the period of her formative working life there were many singers making it big after the decline of the big band business such as Peggy Lee, Jeri Southern, Ella Fitzgerald etc. so although she possessed a fine voice with a nice intimate delivery the odds were stacked against her.

Her choice of songs on these recordings are pretty standard for this period so naturally her performance of them would have been compared with other singers of the period, so may be exploring the Great American Songbook in a little more depth her recordings may have had a little more impact.

“It had to be you” is a slightly different reading of the song and taken at a slower tempo the usual.

The accompaniment by the Hal Otis quintet is a little different than the usual piano trio or big band and suits Miss Abbott’s vocalising.

The final eight tracks are by the Hal Otis Quintet and owe much to the Quintet of the Hot Club of France but fill out the album nicely.

If you are a collector of obscure singers of the Fifties you may wish to add this to your collection, otherwise there are many more singers of quality out there.