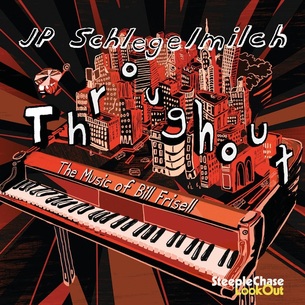 J P SCHLEGELMILCH- Throughout – The Music of Bill Frisell

Bill Frisell, as many will know, is a guitarist whose compositions take their inspiration from that rich and fertile genre described loosely as `Americana` and these solo piano versions of his repertoire capture their essence with a poignancy and reverential respect that is steeped in nostalgic yearnings for a musical world that we must not allow the clamour of contemporary idioms to obscure.

Schlegelmilch duly captures these influences in ten pianistic impressions that are redolent of the music of Charles Ives, Stephen Foster, Scott Joplin, as well as the minimalism of Reich and Adams plus the more complex contrapuntalism of Lennie Tristano and John Lewis A perfectly realised synthesis.

They range from the calm, diatonic pastoralism of the opening track, through the quirky left field take on ragtime that follows and on to denser, chromatic dialogues, all of which are executed with an unassuming virtuosity that stimulates the ear without obscuring the creative intent. `Throughout` is a beautiful recording that deserves to sit alongside your collection of Jarrett and Mehldau discs.