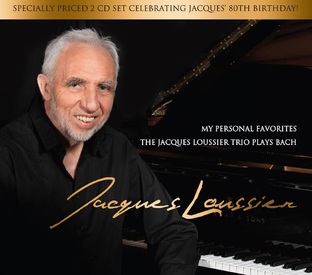 Recorded at various locations between circa 1985 and 2000

JACQUES LOUSSIER - Beyond Bach:  Other Composers I Adore 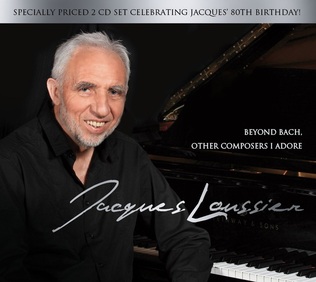 Telarc have produced a beautifully packaged pair of commemorative double CD sets to celebrate the eightieth birthday of Loussier who, like him or loath him, must feature prominently in any discussion of the conversation that has taken place between classical music and jazz.

That jazz musicians and classical composers alike have been fascinated by the potential offered by a fusion of the two genres is a fact that cannot be denied and one that has found expression in the diverse musical interests of such figures Stravinsky, Bartok, Jelly Roll Morton, the MJQ, right through to contemporary visions of Uri Caine, Richie Bierach among others. When Alyn Shipton, in his otherwise authoritive notes says that Loussier was responsible for breaking down the barriers between classics and jazz he ignores a trend that was well established before the Frenchman came on the scene

It is, however, the nature of Loussier’s work that exercises the passions of jazz critics, like Alum Morgan, who find it to be a dubious endeavour to make jazz type sounds palatable to an audience that really holds the jazz idiom in contempt: in other words his work is no more than a marketing ploy lacking in artistic integrity; an attempt to sanitise jazz and purge it of its vital energy whilst making the challenge of listening to classical music less demanding.

This is an interesting debate with some defensible arguments what can’t be denied is the sheer virtuosity of Loussier’s playing and the rapport he enjoys with his equally talented colleagues which speaks of a conviction to which narrow commercial expediency can’t be wholly attributed. Much of the music in these discs is so thrilling and beautiful that it lies beyond the power of words to give it adequate expression and to characterise it as mere aural wallpaper seems churlish.

The discs in question offer a selection of music recorded for Telarc that has already appeared in a complete form elsewhere: existing collectors will need to check carefully that they are not replicating purchases already made. Of the two sets, the Bach recital is the most convincing in terms of bringing the two styles together because Bach’s contrapuntalism is embedded in jazz piano from Tristano to Hiromi and moving from one idiom to another seems natural and unforced.  Indeed, it is  Loussier’s baroque interpretatations that generally offer a more fertile ground for the fulfilment of his musical vision   than his  incursions into the romanticism of Chopin and the chromatic impressionism of Debussy, Ravel and Satie which appear in the second set of `adored` composers. Not all of these are as convincing, the version of Ravel’s `Bolero` being only slightly less vacuous than the original and saved from repetitive monotony by Arpino’s thunderous drumming whilst the Debussy pieces, particularly `Arabesque` are unnesssaarily weighted by percussive involvement of any kind whatsoever. The second disc in this set finishes with some interpretations of Chopin Nocturnes to which he adds some bluesy inflections and stride piano bounce. In these pieces as with a version of Schumann’s song `Dreaming` he dispenses with bass and drums which is a wise decision given the limpid nature of some of the pieces .

If you haven’t any Loussier in your collection then these collections offer a good overview of his post 1985 recordings and have the advantage of superb audio. As regards the power of his re-interpretations here as against his 1959 `Play Bach` interpretations which earned him superstar status, I am not qualified to make judgement. Suffice to say that apart from one or two instances when syncopated rhythms actually impede the musical flow, Loussier and his colleagues make a powerful case for the union of jazz and classical idioms to which only the most hidebound could raise serious objection.