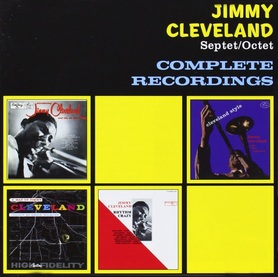 Jimmy Cleveland, who died in 2008, was a fine trombonist who deserves to be more than a footnote in jazz history. Stylistically influenced by J.J. Johnson and standing alongside such talents as Curtis Fuller, Frank Rosolino, Carl Fontana and others of that ilk, straddling mainstream and bop, he was comfortable in a variety of musical settings as evidenced by this valuable re-issue of his recordings as leader for the Emarcy and Mercury labels.

It appears from the evidence of these recordings that he liked to work within the context of arranged set pieces and this is borne out his work as a sideman with musicians like Charles Mingus, George Russell and Gil Evans.Consequently arrangers contribute signifcantly to these recordings and in the case of at least one of them, as noted in  the original sleeve notes, share equal billing with Cleveland himself.

The first of these sessions, `Introducing`, has Quincy Jones as the arranger and his distinctive imprint is unmistakable. Though the eleven pieces are contrived to showcase Cleveland’s fleet , quicksilver talent, he is set, like a precious stone, within intelligently constructed arrangements that admit a diversity of instrumental highlights to sparkle as well as allowing powerful solo voices like Cecil Payne’s baritone and Lucky Thompson’s tenor to make stirring individual contributions. There is an easy , swinging, Basie feel about Quincy’s arrangements and some of them are quite loose admitting a jam session flavour. Such a track is his loping blues, `Count ‘Em ` with solos for everyone backed by riffs of mounting intensity.

In `Cleveland Style` and `A Map of Jimmy Cleveland` Ernie Wilkins and, to a lesser extent, Benny Golson take up the arrangers baton and their constructions have a more overtly modernistic feel , rather like those of George Russell’s `Jazz Workshop` Time signature trickery is in evidence in pieces like `Out of this World` which begins in 6/8 proceeds through 4/4 before returning to the original exotic measure of the theme statement. Add in a rubato modal solo for Golson’s breathy, serpentine tenor and you have done some travelling in stylistic terms.

Both these sets feature the sonorous sound of the tuba augmenting the ensemble writing and  functioning as a solo instrument, at times puffing along in counterpoint to Cleveland’s enunciation of the melodic themes or adding weight to the bass line. Of these tracks `Jimmy’s Old Funky Blues` with its brooding film noir quality is enhanced by the sombre triumvirate of trombone, tuba and flugelhorn, the vaguely nightmarish gloom penetrated by Richardson’s enquiring flute : a memorable piece of jazz impressionism. The set finishes with a sprightly conflation of Charlie Parker themes dominated by `Donna Lee` and operating under the title `Jay Bird`, providing another example of Cleveland’s rapid fire technique.

In the final album , `Rhythm Crazy` Benny Golson shares the arrangers chores with Gigi Gryce and there is a combined effort to showcase the rich velvety tones of Cleveland’s trombone sound. Clever arrangements continue to be employed as in a slightly atonal version of the ballad `We Never Kissed` featuring a fascinatingly oblique piano solo by Hank Jones but overall the route is more straight-ahead with some superb tenor work by Golson. Dissapointingly, in reproduction term this set suffers by having a rather muddy sound with limited dynamics. A pity because the music is first class and deserves a better transcription. Notwithstanding this minor drawback what we have here is an absolutely super re-isssue of music that deserves your keenest attention. The double C/D set comes with a twenty three page booklet containing original artwork, sleeve notes, and a contemporary essay in appreciation and evaluation of Cleveland’s singular contribution.