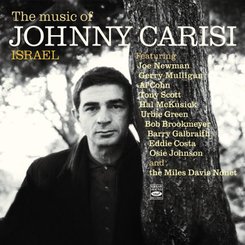 Johnny Carisi began his musical life as a jazz trumpet player but honed his arranging skills with the Glenn Miller US Air Force Band and later arranged for the forward thinking Claude Thornhill Orchestra along with Gil Evans for whom he was to have a further association on Gil’s “Into the Hot” album.

The majority of the compositions on this album were written by Carisi and all the arrangements, the one that brought him to the jazz ”public’s attention was “Israel” which appeared on the Miles Davis “Birth of the cool” album and this composition features three times on this collection.

This album fully represents Johnny Carisi’s jazz output during his brief association with this type of music but his horizons were set beyond this field and although he continued in the musical field it had little to do with jazz.

The first seven tracks feature Johnny Carisi’s Jazz Workshop eight piece group and although it was recorded seven years later than the “Birth of the cool” session it still retains flavour and approach if not quite the same instrumentation. Although there are two standard tunes on these seven tracks it is the Carisi composition that are the most interesting. One of the tracks is “Springville” which appeared on the “Miles Ahead “ album but this version is taken at a slightly faster tempo and has a different feel to it.

“Walkin’ on air” by the Tony Scott Tenet has a much more conventional instrumentation and it’s a pleasure to hear Tony Scott’s unconventional clarinet playing which makes this a more than interesting track.

The three tracks by the Urbie Green Big Band are fine swinging big band performances and Urbie Green’s trombone playing never fails to be of interest and along with some well seasoned sidemen these are performances which leaves you wanting more of the same.

One of the other performances of “Israel” is by the Gerry Mulligan Concert Jazz Band and is arranged by Johnny Carisi and gives a whole different feel to the band much as did the arrangements of Gary McFarland did for the band..

For any lover of interesting arranging this is a must have release and Johnny Carisi’s work deserves wider attention.