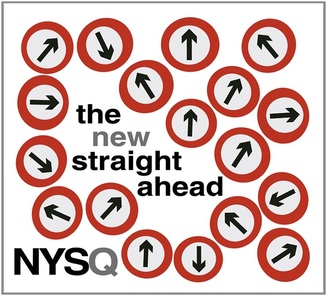 The new straight ahead as defined by this group of musicians who style themselves as the New York Standards Quartet is anything but straight and narrow and it will immediately strike a chord with those who like their jazz to deliver contemporary frissons from within the context of familiar material. The standards in question are song book classics and jazz staples subtly refurbished with a diversity of rhythmic permutations, re-arrangements and harmonic subtleties that present familiar material in a new light without alienating our affection for it.

The group has been in existence since 2006 and this is their fourth album, their first for the enterprising Whirlwind label, and it is evident from the confident rapport reflected in their playing that these musicians have developed a mature working relationship of the type that characterises the best of the big name combos we have come to revere.

After presenting their mission statement with a few bars of `Polka Dots and Moonbeams` they launch into Herbie Hancock’s `The Maze` which begins with a pulsating bass obligato before Armacost’s virile, throaty tenor takes up the theme and gives it brow mopping workout before passing it to Berkman who sets it alight with a blazing piano solo that all but extinguishes the original’s modal sobriety: throughout Jackson’s high octane drumming stokes the inferno.

They follow with a version of `It Don’t Mean a Thing...` which swings in various directions employing a diversity of time signatures to great effect. For this number Armacost takes up his soprano with which he demonstrates an effervescent agility, every bit as potent as his tenor playing. The recital continues with multiple delights including an unsentimental `Autumn Leaves` swept along on a rock beat, a respectful but far from slavish `Misterioso` and a passionate, rubato rendering of that exotic ballad `Zingaro` which is a feature for Armacost’s moody tenor and in which he achieves an almost operatic intensity.

The disc finishes with a tenor sax rendering , complete with powerful drum breaks, of Irving Berlin’s  `Remember` which recalls Hank Mobley’s famous version from the classic Blue Note album `Soul Station` before finally signing off with the missing bars of the opening intro.

To summarise I would give this disc my keenest endorsement as an example of contemporary jazz that preserves the tradition without being hobbled by it and it is one that I shall readily return to as often as I revisit my collection of Joshua Redman and Joe Lovano discs, both artists who like the NYSQ, embrace the new without sacrificing the felicities of the past.