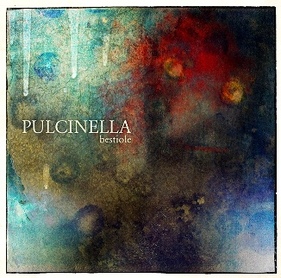 Pulcinella are a Toulouse based group who purvey a cross genre musical agenda that is almost withering in its frenetic diversity. What we have here is a kaleidoscopic panorama of various styles that are welded together in a display of jaw dropping virtuosity that leaves the listener shell shocked and breathless. It is not jazz, not of all of it anyway, but it is clothed in some of the vestments of jazz, namely rhythmic verve, improvisational impetuosity and boundless daring.

My limited acumen makes it difficult for me to describe exactly what is going on in musical terms but my ears detect a melange of sounds that range from fairground music and burlesque through folk idioms to tango and free jazz with rock rhythms as well as some sinister Morricone inspired cinematic menace. There is instrumental conflict, dissonance and cacophony as well as legato passages of maudlin Neapolitan sentimentality. There is a sort of march with bass ‘n drums passages, a Spanish tarantella, some feverish dervish Middle Eastern like dances as well as crystalline sounds from the mandolin. Glockenspiel and dulcimers, all requiring a degree of musical accomplishment that transcends familiar categorisation.

Taken in one sitting all this can be heavy going. What works well as a live act doesn’t always translate effortlessly to the recorded medium. After 30 minutes my appetite for novelty was thoroughly sated and I was ready to reach for the relative serenity of a Stan Getz disc. This is probably an age related problem on my part and shouldn’t persuade those of you who are within striking distance of the venues selected for their forthcoming UK tour to miss the opportunity of enjoying what is sure to be a fun filled gig.