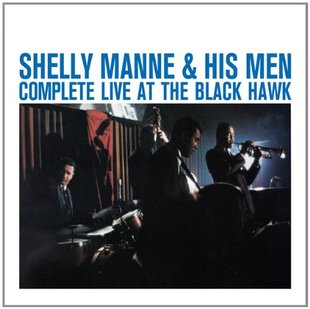 SHELLY MANNE & HIS MEN - Complete Live at the Blackhawk

Contemporary Records founded by the enterprising Lester Koenig in 1951 raised the bar in recording and production technique becoming the first label to record jazz in stereo. The Contemporary sound was exemplary and remains so even by modern digital standards. Although the Contemporary catalogue’s most famous recordings are over fifty years old the originals were so good that subsequent re-mastering has added little in clarity of detail and enhanced timbre.

Such is true of this re-issue of one of the labels finest and most ambitious live sets. Recorded over three nights at San Francisco’s `Black Hawk` nightclub in 1959 the Shelly Manne quintet is captured in such warm intimacy that you can imagine being seated amongst the apparently sparse but appreciative audience. It must have taken some commercial chutzpah on Koenig’s part to issue four long playing records of extended jazz performances that were anything but the barnstorming blowing sessions typical of Granz’s `Jazz at the Philharmonic` but he was a notable risk taking innovator and, most importantly, a connoisseur of high quality jazz performance. Some three years earlier he had recorded pianist Hampton Hawes in a spontaneous `All Night Session` which ranged over three LPs to great acclaim and his decision to record Manne’s group was destined to receive similar accolades with the resulting discs becoming, in the words of Bob Goia ,“ the cornerstone of the Contemporary catalogue.”

Much has been written about this music over the years; Morton and Cook’s `Penguin Guide to Jazz CDs describing it as an essential purchase for those who thrive on uncomplicated, straight ahead jazz at the softer, gentler end of the hard bop sound spectrum. Shelly Manne  was a drummer of consummate good taste and refinement with a technique that enabled him to elevate the drum kit to the status of a melody instrument and his various `Shelly Manne and his Men` combos exemplify what we have come to think of as `West Coast` Jazz`. What makes this set somewhat different than his other enterprises under that name is that it was the group’s first `live` recording in a club setting and that he set aside the `Third Stream`        leanings that feature so prominently in his studio discs. Everything here is uncomplicated and swinging but without being in any way derivative and banal.

Of his band members Richie Kamuca, was a light toned Lestorian tenor with his own things to say, Joe Gordon a trumpeter who had he lived beyond his 36th birthday would have a major contender for Clifford Brown’s crown and London born Victor Feldman whose career with Cannonball Adderley and Miles Davis was launched on the strength of these recordings. As for Monty Budwig, his playing here represents the pulse of jazz that needs no labels or categories’ to define and confine it.

Of the twenty six pieces that comprise this four CD set few are less than ten minutes long replicating with exactitude the performance experienced by the Black Hawk audiences on the respective evenings that recording took place. The music, comprised largely of standards like `Summertime` and `Poinciana`, coupled with jazz perennials like Golson’s `Whisper Not` and a few originals like Frank Rosolino’s lovely jazz waltz `Blue Daniel` are extended to give space for eloquent, easy on the ear solos that state their case without resorting to ego driven histrionics. It is the purity of expression that makes these discs so special and they provide a perfect antidote to the febrile edginess that is the hallmark of today’s jazz music.

This package is a most desirable purchase for those who don’t already own this music ,which first appeared in CD form on five discs This re-issue condenses to four CDs each contained within its own cardboard sleeve and packaged collectively in an outer sleeve which contains a booklet reproducing original sleeve notes and a reappraisal by Victor Ores. The sound is excellent as one would expect of music derived from the original Contemporarary masters and one can only hope that the estates and families of the wonderful musicians who created and produced this most exceptional music will benefit from its latest re-appearance.