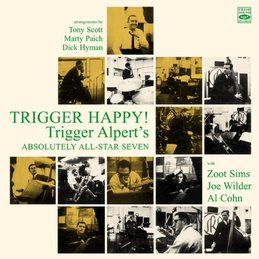 Although Trigger Alpert is not a name that comes to mind when thinking of bandleaders of note but one glance at the personnel will tell you he has put together a band of top class musicians.

And army orchestras but he also had short spells with Woody Herman and Benny Goodman after which he immersed himself in the steady employment of studio work..

Trumpet player Joe Wilder is another musician who rarely worked outside the studios in later years and it is a bonus to hear his marvellous sound on this album.

Tony Scoot, Al Cohn, Zoot Sims and Urbie Green are no strangers to the jazz scene with Ed Shaughneesy on drums rounding out the piano less rhythm section.

All three reed players double on another instrument, Tony Scott on tenor rather than his more familiar clarinet, Zoot Sims on alto an instrument he recorded on a number of times during this period and Al Cohn on baritone for which there are many recorded examples.

As well as three originals Trigger Alpert as sought out a number of unfamiliar numbers by prominent composers such as the opening number by George and Ira Gershwin, “Treat me rough”. The arrangements are taken care of by Marty Paich, Tony Scott and Dick Hyman

It’s good to hear Tony Scott’s clarinet playing in this type of company and gets a chance to shine on Marty Paich’s arrangement of “Love me tomorrow” for which he takes full advantage.

As you would expect Trigger Alpert’s bass playing is given plenty of exposure and he pulls out all the stops on Dick Hyman’s composition “Tranquilizer”.

Although these are good arrangements played by a fine bunch of musicians there is nothing here to set the world alight but it is a good example of small group jazz of this period and worth a place in anybody’s collection who is interested in jazz of this era.