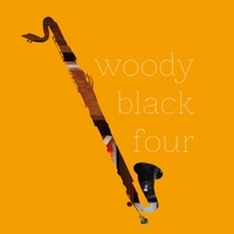 Though not readily thought of as a jazz instrument, the bass clarinet has been effectively utilised by jazz musicians who have found inspiration in its liquid expressiveness. Harry Carney, Eric Dolphy, Marty Erlich, John Surman and Andre Jaume are amongst those musicians who have made the instrument a potent and credible voice in the enunciation of jazz improvisation and this enterprising quartet who operate under the title of `The Woody Black Four` (geddit?) provide further proof of the instrument’s ability to inhabit various musical genres and push at the boundaries of its conventional role as part of the orchestral palette in symphonic music.

Most of the fourteen pieces presented are eclectic originals which combine folksy themes and pastoral airs with knotty, hyperactive scherzos; avant-garde dissonance with blues licks, European salon music and burlesque irreverence, often within the space of a single piece. Throughout, one’s ear luxuriates in the dark sonorities, the rich, chocolaty harmonies, the accordion like drones and the lugubrious, oleaginous overtones which are in turn relieved by flashes of brilliant treble from the bass instrument’s smaller brother and often enlivened and driven forward by the rhythmic devices of slap tonguing and key slapping.

There is one pure jazz piece, a delicious  version of Bobby Timmons’ classic standard, `Dat Dere` which is so cheekily insouciant it deserves to become a classic in its own right. The disc ends on a mysterious and sombre note with a short track that aspires to the condition of `world music` in which the  quartet  emulate the sound of the didgeridoo merged with the bamboo flute of the rain forest and the harsher ululations of the Arabic shawm.

This is a fascinating disc which has echoes of the ruminative instrumental conversations that took place between Jimmy Giuffre and Andre Jaume but whilst the music of Woody Black Four is at times hermetic it is also at pains to startle, entertain and delight.